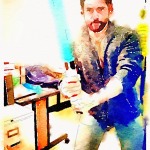 This interaction could have happened in any store. The fact that it happened in a Wal-Mart only justified my choice to use that chain in one part of my novel.

Thanksgiving morning. My local grocer had already closed, and as these things go I needed a handful of last minute items. Hoping to complete my mission, I went to the Wal-Mart. After gathering what I needed and standing to wait in a long line at the only open checkout, an older gent took his place behind me. His age was a bit obfuscated by his winter gear, I guessed he was somewhere between his early fifties and early retirement.

“Hey there fella,” he started. He had the look I generally associate with that person on the airplane. You know… the one who is going to talk no matter what you do. I usually assume it’s chatter brought on by a fear of flying. Only the contractor had securely anchored the store to Terra Firma. Still… the man was going to talk. “Say,” he kept going, “you must work out.”

I assure you my poofy ski jacket is not tailored to flatter anyone but the Sta-Puft Marshmallow Man. But he wasn’t wrong, so I nodded. “A little bit, yes.”

My prayer that a short answer would stave off more conversation was ignored by the gods.

“What do you do for a living?”

What? What? I’ve actually been waiting for that question! I wanted to be able to use my new answer! “I write science fiction novels!” I was suddenly happy to be in the conversation! Yay!

Then he frowned as though he couldn’t relate, “I never got into that.”

“No,” he interrupted suddenly friendly and chatty again. “I’ve never gotten into books.” He smiled as if that explained everything in the universe.

My vision tunneled. I had the distinct realization that I might very well be talking to an alien from another dimension. Simultaneously I realized he had just cheerfully dismissed my chosen profession as irrelevant. As I write this hours later, I’m insulted. At the time, I was hurt.

I should probably have tried to convert him to the reading crowd, but I was too stunned. Who doesn’t enjoy a book of SOME sort? I no longer knew how to relate to this person. I looked away to see if the cashier had picked up the pace. When I looked back, I saw that he had found a new chat buddy in the woman who had newly arrived.

I retreated into myself and sulked for he rest of my time there.

Books have done so much for civilization. They provide archives for our knowledge and memories. They provide an means to expand our awareness and imagination. I am thankful for books.

Today’s experience has encouraged me to pack up all the books in my basement and take them to libraries and literacy centers. If I can spread the love of reading, it’s my duty to try.